Fear we ago again, another financial crisis looms 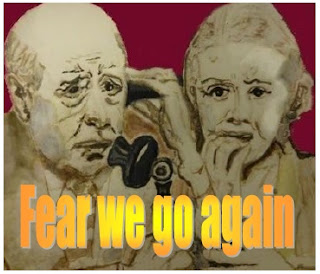 The Covid19 pandemic is the 2nd major crisis in 12 years. Many businesses & people have just about recovered from the financial crash of 2008. Another major panic, so soon after the last encounter with disaster, forces a rethink of priorities in all aspects of life.
The financial crisis of 2008 was followed by a “top down” tsunami of money issued by central banks, for capital markets, bondholders & institutions. This largesse was deliberately targeted away from ordinary people, for fear of undermining incentives for work & enterprise.

The benefits of the wall of money were supposed to trickle down to the population from increased spending & investment by holders of financial & asset wealth. In practice there is a limit to how much of everyday goods & services anyone can consume. Wealthy asset-owners splashed their cash on classic cars, art-works & real estate. The value of expensive assets rose to stratospheric levels while workers, citizens & small businesses struggled through a decade of austerity, reduced incomes & public service cutbacks. A decade of stagnant incomes & cuts in public services spawned an angry anti-establishment mood, resulting in votes for Trump, Brexit & the rise of neo-fascism word-wide. Voters’ anger is still tangible as we enter a 2nd crisis, possibly more difficult than the panic of 2008. The financial crash of 2008 had a clearly identifiable cause & technical remedies were implemented quickly, but not fairly. Structural reforms to address fundamental economic issues were discussed but largely forgotten as the economy began to pick up again.

Large injections of central bankers’ cash led to a decade of modest recovery. The crisis caused by poor lending was unwound, at great cost to borrowers. Covid19 is a much more dangerous enemy, invisible, barely understood, striking old & young, wealthy & poor. The economic impact of the Covid19 crisis is clear & dangerous. Vast numbers of workers are being laid off. Businesses suddenly find customers have vanished. Supply chains are interrupted & finished goods are cleared from shelves as quickly as they’re delivered. Central banks are responding to the economic dimension of this crisis using the same playbook as 2008 but structural weaknesses in that strategy and the toxic legacy of a decade of austerity can’t be ignored. No useful purpose is served by pumping more cash into the bank accounts of asset-rich investors, hoping some of it may trickle down to the public.

Too many people suffered the unfairly distributed ill-effects of austerity, especially the working poor, after 2008. Economic incentives mean little for working people who can’t earn enough to pay rent or feed themselves.

Darwinians who argue the state should withdraw from the economy & allow unfettered free markets are quick to appeal for state aid when it suits them, as the banks and auto makers did in 2008 and the big airlines are doing now. Once the crisis passed, corporations which were rescued with public funds returned to private hands, a very questionable deal for taxpayers. The corporate rescue remains controversial for taxpayers who suffered the effects of brutal austerity and relentless repayment of outstanding debts. Employees & stakeholders felt the cold effects of recession & debt recovery while bank losses were socialised after 2008. To do the same again could incite revolution. Structural inequality is a monetary virus, the economic equivalent of Covid19, threatening to destroy the capital system. Another period of austerity alongside renewed asset inflation could be a provocation too far for many people. I believe that, if Central Banks are to turn on the money taps again they must do it from the bottom up, rather than the top down, this time.

Money should be directed at workers and consumers in novel ways with the aim of steadying the economy but also to address some of the long-term structural issues around inequality & unfairness in our economic system. The state must assume a larger role in the economy, partly reversing decades of disengagement. This does not require wholesale re-nationalisation but it does need a willingness to intervene, to take-over failing public utilities and to restructure failing markets. How would this be done? The means are available & can be achieved at reasonable cost. Most of the costs will be incurred anyway. Central banks are already committed to injecting huge amounts of cash, the main question is; how will the benefits be distributed?

A central point which must be remembered is that the economy is not only for the benefit of rich people. Money should provide and equitable means of exchange, of enterprise and reward, for the wellbeing of people at all levels, rich and poor, men & women, young & old. Our economic system, as presently arranged, offers great benefits for a few, with relatively little effort while vast numbers of people work hard for very little reward. People whose lives are insecure & who earn little by their best efforts have no investment in the system & might as well see it collapse.

Central banks should forget the old playbook and try a new approach. Rather than inflating demand for Picassos & Ferraris there is an urgent need to shore up the economy by giving more purchasing power to workers & consumers at the lower end of the income scale.

A systematic programme of spending aimed at low income/ low wealth citizens would generate significant benefits “percolating up” for everyone. This could be done by scrapping complex, time consuming welfare benefits & tax reliefs & replacing these with a universal basic income. Some states are already introducing emergency welfare measures to compensate workers laid-off during the Covid19 shut-down. There is little cost difference between emergency welfare payments and universal basic income but there could be enormous economic benefits & administrative savings. Further measures to put consumers on a stronger footing could include a programme of matching payments, incentivising consumers & small businesses to pay-off excessive debt, over a period of years.

Economic incentives would be stronger if consumers are offered realistic rewards for achievable efforts. Increased supply of affordable housing for rent should be a priority with central banks providing large reserves of, time limited, cash for governments willing to cut through planning and political constraints to build new, quality, affordable homes for everyone in need of one.

Our human capital could be further developed by funding programmes for co-payment incentives to repay student debt. Most student loans is likely to be written off anyway, creating perverse incentives, incubating a cynical attitude towards debt obligations in younger generations which could be truly damaging in future. Adult education, retraining & development needs significant investment, with potential benefits for everyone. Childcare facilities need investment, to free up talented women & enable greater participation in the economy.

A fair, accessible system of healthcare for everyone, would relieve one of the main causes of stress and worry, including personal bankruptcy in the USA & would allow consumers to plan ahead, enhancing their ability to invest in their future and to spend on big-ticket items. Consumer spending accounts of over 2/3 of the economy. Sluggish consumer spending is a vicious cycle, dragging everyone down as the economy sinks into low-growth, low income, low productivity. A long-term structural boost to consumers would benefit all aspects of economic life. Central bank cash could be directed towards funding green energy projects with long-term benefits in terms of carbon reduction, reduced reliance on fossil fuels from volatile regions & promotion of new green technologies.

Developing countries need an urgent injection of cash to stimulate supply chains in distribution, healthcare and food supply. The costs is modest and the rewards are potentially enormous. The cost of doing nothing will be calculated in social collapse, political upheaval and migration of massive numbers of desperate people.

It has been said one should never let a crisis go to waste. We can make productive use of the present crisis by applying lessons from recent history & building the foundations for a better future, for everyone who’s prepared to make an effort & participate, for the common good.