Showing posts from October, 2019
Show all

Time's up for Tory Brexidiots

In the storm of Brexit confusion one thing is clear; a majority of voters and MP’s, including many staunch Brexiters, agree that Britain needs to agree a future working relationship with the EU. Anti-EU bluster, threats & lies serve no purpose other than making it more difficult to agree a way forward. Tory Brextremists, including #LiarJohnson, have spent years telling lies & whipping up resentment against the EU. Deluded & contradictory Brexit promises, by Leave campaigners in 2016, make it very difficult for a bitterly divided Tory govt to agree on a future relationship with the EU. The biggest barrier to a future relationship between Britain & the EU is irrational Tory anger, supported by overseas interests. #LiarJohnson is totally unconvincing when he talks about “our friends & partners in Europe”, having built his career on promoting anti-EU lies. It’s very unlikely a Tory govt can negotiate a mutually beneficial relationship with the EU. The feuding Torie
Post a Comment
Read more 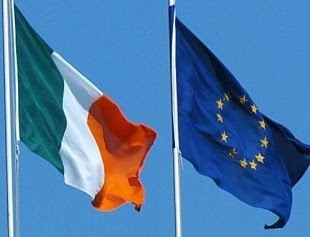 The proposals launched at the Tory conference have no chance of acceptance by the EU or Ireland, for several reasons, clear to most observers but seemingly unknown to the dimwit UK govt. Tory ministers have miscalculated their relative position at every step & are now poised to turn a crisis into a disaster for Britain. 1) creating new customs & regulatory barriers to cross-border trade in Ireland would be a fundamental breach of the GFA. Ireland & the EU are strongly committed to the GFA & take their responsibilities seriously. There is no possibility of the EU approving the UK govt’s irresponsible breach of the GFA. UK will be rightly condemned for this reckless breach of a fragile peace treaty & will, one way or another, pay a heavy price for disregard for the rule of law. 2) The GFA was incorporated into Irish law by a constitutional amendment. Any material change to the terms of the GFA would require a further constitutional amendment. Even if there was a
Post a Comment
Read more

Brexiter leaders have a problem. They persuaded millions of people to vote to leave the EU by promising nothing would change, massive new funds would flow to the NHS, UK could have its cake & eat it & they would enjoy the "easiest trade deal in human history". Brexiters promised UK citizens they would still enjoy the benefits of EU membership, without the responsibilities, despite clear statements from EU leaders that "cherry picking" wouldn't be allowed. Brexiters claimed EU leaders & experts were peddling "project fear". "We've had enough of experts", “we’ll hold all the cards”. (M Gove). Three years after the referendum, the truth is out. The EU27 can never offer better terms for a non-member than for members. The cost of Brexshit will devour any savings, the NHS will be harmed, not helped & UK will have inferior trade terms compared with EU membership. The promises made to voters in 2016 can't be delivered. Lea
Post a Comment
Read more
More posts