- September 14, 2018
Enthusiasts for quitting the EU claim that British business will be liberated to trade freely with countries like China and India, implying that this is impossible now. My business experience, in India, shows that Brexit campaigners have got their facts, and their arithmetic, badly wrong. I know of UK, Dutch & German businesses which have traded very successfully in India and emerging markets for years, under EU rules that Brexiters claim are an obstruction to free trade.

Tories like Jacob Rees Mogg have suggested British business could benefit by dropping standards to Indian levels, with big savings for the UK. I saw shockingly hazardous working conditions, including child labour, in India. If Britain were to drop to that level we would see a rapid increase in workplace injuries, disease and welfare costs with litigation arising from injury claims.

One of the worst Brexit lies is that wages and living standards in general are driven down by immigration. Many immigrants are employed in work Brits just won’t do, at any price. EU nurses, doctors and engineers aren’t driving down wages for their UK counterparts. They expand the economy and add value for everyone. In fact one of the biggest threats to UK wages comes from foreigners who never leave their home countries, China, India, Vietnam, Thailand and emerging markets. Workers in those countries are willing to work long hours for a fraction of UK wages, in hazardous conditions. That is real wage competition and Brexit will make it worse. EU legislation and external tariffs provide some protection against predatory competition. UK, outside the EU, will lose this protection & could feel the full blast of Far East competition. Some employers will not be slow to use this new source of cheap labour or at least to threaten UK workers with closure unless they accept less favourable terms.

Brexiters also claim that trade can be done globally irrespective of geography. I’ve negotiated with several potential suppliers and collaborators in India. The contrast with European plants is very striking. European manufacturers tend to invest heavily in equipment, to achieve maximum efficiency. Indian factories relay on cheap labour and generally employ many people on very low wages. Factory gate prices may be low but logistics and management costs can be surprisingly high when dealing with a poorly regulated market. Risk management is almost non-existent, standards erratic and the work environment is often extremely hazardous.

On a visit to a plant in southern India, which manufactures parts for use in automotive industries and construction, I saw women and children working in a toxic atmosphere with epoxy and chemical resin fumes in the air. I couldn’t stand the smell for more than a minute or two. Labourers were expected to work in those conditions for long hours, every day, month after month. Quality control was variable with an unacceptably high reject rate. I witnessed large parts being loaded onto trucks by hand with no lifting gear or protective measures, exposing workers and finished products to exceptional risk. This only makes sense if employees are treated as expendable assets. Any UK employee with rudimentary bargaining power, or self-respect, would refuse to work like this and the employer should expect to be sued.

I looked at sourcing components for use in our business in Europe, bearing in mind the need to meet EU environmental standards. In the event that Britain were to drop all EU standards it’s conceivable we might see a case for importing such products however the numbers just don’t add up. The cost of logistics and shipping components to Europe eats into any savings on labour. When one factors in the cost of managing the supplier relationship, currency & shipping, the savings are surprisingly small and they carry significant risk. Geography really does matter in trade. Britain can import components from high-wage Europe at roughly the same total cost as low-wage India when shipping, supervision, quality control and working capital are accounted for, with less operational risk. 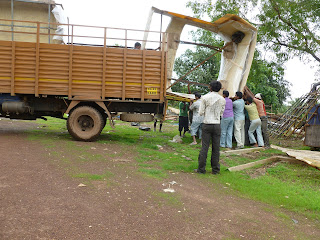 Even if we somehow ignore the environmental costs, the implausible business case and the attack on living standards there is a final, unavoidable, consideration. The UK economy is driven by consumer spending, in turn driven by wages and employment. If British wages were to be subject to Indian-level competition in a free-for-all it’s likely there would be a severe downward lurch in UK earnings. This would have serious knock-on effects on consumer spending and demand for a wide range of goods and services on UK high streets, in restaurants, transport & housing.
It’s an illusion to think that we can attack incomes, the consumer fuel driving over 2/3 of the economy, without serious knock-on adverse effects. All sectors of the economy will suffer if consumers are forced to accept another severe round of wage austerity. An unfettered race-to-the bottom in UK wages without tariffs or trading standards to constrain the flow of goods would cause a severe shock to the UK economy and the welfare of everyone, rich and poor, in the UK. For all the above reasons I believe Brexit is an act of economic self-harm which threatens great damage to the UK. The blow will fall hardest on those who are least able to defend themselves against the damaging effects.