Brexit high priest Rees-Mogg argued, at the parliamentary Treasury select Committee, that there is a very long way to go in abolishing business regulations post-Brexit and “if it’s good enough for India, it could acceptable here”. Rees-Mogg is either deluded or he and his fellow Brexiters are planning serious harm to UK workers and consumers.

I've been to India on a number of business visits to look at practices in construction & manufacturing. I observed striking examples of the contrast between UK & Indian business regulation, as an active investor in modular construction systems with a professional interest in the industry in Europe and internationally.

I visited a large construction site near Faridabad where a series of tower blocks, average 20 stories, were being built. I found an astonishing lack of investment in equipment such as earthmovers, power tools, cranes or lifting gear, all of which would be found on a European project. Scaffolding consisted of poles lashed together in an unsecured structure with no evidence of cross-bracing at corners or safety harness fixing points. Building materials were moved around site using donkeys and manual labour, including women and young children. Lifting gear consisted of a two-stroke engine used to drive a winch attached to the scaffold, to haul heavy materials to the upper floors on a timber pallet. This appeared highly dangerous & insecure. Concrete was pumped using a battered contraption which would be banned on a UK construction site. Ground excavation was by hand with rubble removed on metal pans carried on labourers’ heads. 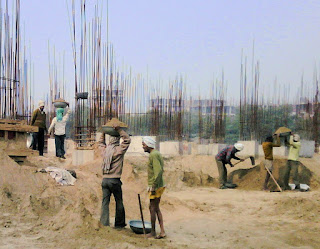 Bricks were manufactured in a specially assembled kiln with local clay excavated and formed by hand. Male labourers were paid about £1.50 (UK £ equivalent) per day with no pay for absence, illness or injury. There were many women and children working in the brick field. I was told they earned lesser wages than their male equivalents. No safety boots, gloves, goggles, helmets or high-visibility clothing was in use. I was informed there had been some life-altering injuries among workers on site. No figures were available & the site manager was reluctant to discuss the subject. He told me that electricity, water & sewerage connections were "delayed" until an unspecified date after completion of the buildings. Residents would be expected to make their own arrangements, using generators for power & carrying bottled water up to 20 flights, pending the final connection. He shrugged & looked away when I enquired about drains. I heard that untreated sewerage was routinely discharged into local watercourses. Official regulations required construction of a sewerage treatment plant but the buildings were being constructed without any definite plan to do this. 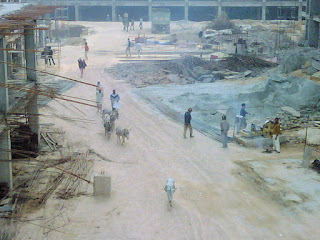 I was told many people in the area relied on private wells but these were generally useless as the water table in the area had already fallen through excessive extraction & sewerage contamination of groundwater was a widely-recognised problem leading to outbreaks of serious intestinal illness.

There were signs of structural weakness in the buildings with concrete columns out of vertical alignment. This would be considered structurally unsound in a European building. My conversations with management, proprietors and local people led me to conclude that very limited building regulations exist in name only, with no evidence of independent, rigorous building inspection or control.

Environmental & safety controls for future residents were dismissed as irrelevant. It was generally assumed people would find ways of looking after their own needs.

I also visited Indian manufacturing facilities for building components, with shocking results, which I'll cover in a separate report.

Even if one allows for some bravado in Tory Brexit propaganda, any suggestion of abolishing regulation, down to a level considered acceptable in India would result in a massive fall in environmental standards, elimination of safety controls & new homes being built without water, electricity or sewerage connections. If Tories believe that Indian regulatory standards are close to being acceptable then UK construction must expect to roll back a hundred and fifty years of progress. New home buyers can look forward to making their own arrangements for power, water & sewerage. If Tories believe contamination of water supplies with infectious diseases is acceptable and welcome a return to child labour and slave wages for unsafe manual work, they should be candid enough to admit this and they should not blame anyone else for the appalling consequences of their Brexit experiment.

(Photos shown here were taken by author, on site, in India)