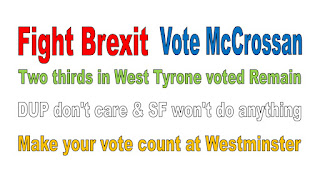 West Tyrone voted 66% for Remain in the EU referendum. The DUP don’t care, they want a hard, destructive Brexit, against the wishes of the people of Northern Ireland. Sinn Fein won’t do anything about it, even though they could use their Westminster seats to kill any prospect of border disruption. Lady Sylvia Hermon is the lone NI voice against Brexit at Westminster. She needs support against the DUP who refuse to recognise the clear Remain vote by the Northern Ireland electorate.