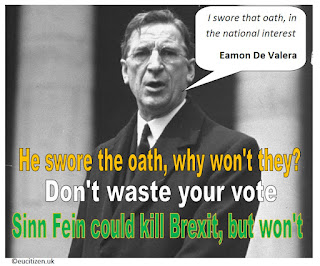 Voters in West Tyrone must consider whether their interests are best served by Sinn Fein’s policy of abstention or whether they might be better served by the SDLP who have shown themselves willing to take an active part in Westminster, particularly with Brexit on a knife-edge and every vote in the UK parliament being counted. Citizens of Northern Ireland, of every persuasion, need representatives at Westminster who will take action to stop a hard border. Lady Sylvia Hermon is doing outstanding work in opposing Brexit but she is a lone NI voice against Brexit, at present. She needs support from all shades of opinion to stop Brexit wrecking our future.

Sinn Fein has been associated, since its foundation in 1905, with the policy of abstention from Westminster although this is frequently misunderstood. The policy promoted by Arthur Griffith, leader of the party in its early years, was that Irish representatives should transfer to an Irish parliament, ruling over Irish affairs, in Ireland. Abstention was not the core policy, it was the natural consequence of the central aim of Irish government by the Irish people. The policy was partly ideological but mainly practical, based on the fact that Irish MPs were in a permanent minority at Westminster, largely ignored and outvoted by non-Irish MPs, on matters of importance to Ireland. Not much has changed in that regard. The tiny band of Irish unionist MPs face a wall of indifference and contempt from their nominal Tory allies, even when their votes really matter, as they do now. Northern Ireland unionists face the same dilemma as Irish nationalists faced over a century ago and they should consider whether their constituents’ interests would be better served in an all-Irish parliament where they would be a very significant and powerful force.

A rare twist of parliamentary arithmetic has created an exceptional opportunity for Sinn Fein to force the British government to change direction. The minority Tory government relies on a small number of DUP votes to remain in power. Sinn Fein, allied with Tory rebels and other opposition parties, could defeat the Tory-DUP alliance. Sinn Fein have it in their power to resolve the problems caused by Britain’s threat to leave the customs union and the single market by taking their seats at Westminster and voting against these measures.

Sinn Fein could have concerns of being trapped in a Westminster quagmire. I believe they should not worry about this for several reasons. Firstly there is an historic opportunity to offer a helping hand to Unionists and those who are concerned about the impact of the EU exit policy. The Tory government is in chaos and the DUP’s slavish devotion to the anti-EU cause threatens great harm to Unionists and Republicans alike. Sinn Fein could act as an alternative voice for all citizens of Northern Ireland who are worried about the current direction of policy.

The UK political system is in crisis. The two main parties are deeply fractured and the minority government is highly vulnerable to a handful of rebel votes. Sinn Fein could strike a hammer blow for Irish interests with a well-timed tactical appearance at Westminster. If, however, they cling dogmatically to abstention, it may be time for NI voters to consider voting for the SDLP, who have never been afraid of representing their constituents at Westminster. The SDLP are making this very argument with an eye to the by-election in West Tyrone, a border constituency where this could have significant impact. Irish voters, North and South must wonder at Sinn Fein leaders demanding action from the Irish government, on Brexit, when, in fact, they have the power to change the direction of events at Westminster, and decline to use it.

There are other reasons to take a positive view of a tactical attendance, in the Irish national interest. Sinn Fein could transform itself in the eyes of voters in the Republic, usually repelled by the terrorist legacy but very concerned about the disruption of Brexit. There is also a unique opportunity for Sinn Fein to build bridges with vast numbers of English, Scottish and Welsh people who are deeply concerned about the current direction of travel.

There is a final, critical, consideration. Sinn Fein might not actually have to attend Westminster to achieve their aims. They could strike fear into the Tories by simply announcing they’re considering taking their seats. A well-timed visit to London by Sinn Fein MPs, poised to attend Westminster, could force the crisis-torn Tory government into changing direction. In the end, one should never threaten something one is unwilling to do and Sinn Fein would have to be prepared to go all the way. I believe Sinn Fein have little to lose and much to gain for Ireland and party interest, in adapting to the unusual circumstances of these highly unusual times. Martin McGuinness surprised many by going into government with Ian Paisley. Sinn Fein’s trip to Westminster would be a further, innovative step in the evolution of a new Ireland. Go on Sinn Fein take your seats for a few days and strike terror into the squabbling Tories in a way no armalite or bomb could ever do.