Leavers on the line. 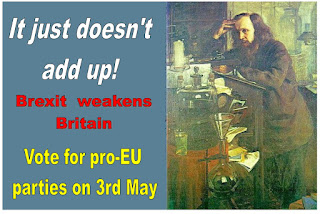 I've been over to leaver-land recently, to find out what people are saying and thinking. There were some surprises. I believe the tone of debate is changing and there is much evidence of doubt as the grand promises of the Leave campaign are shown to be hollow.
Here is a random selection of comments, typical of many I’ve seen, surnames redacted (Leave.EU 2018.04.16);

Philip H: Two weeks ago i was angry that my truck driver wage was only 50 pence an hour more than 10 years ago because of a glut of European drivers.
Last week i lost that contract because an agency full of European driver offered to do it for £1 an hour less.
That why i voted Brexit.

Pete A: Wages are going down due to migrant workers taking lower hourly rates of pay......

Mick S: Over supply of cheap labour means lower wages, and people like blair and Miller get richer.

Jake S: Everyone said that immigration drives down wages. Roll on Brexit in full, not the watered down lefty version

Dominic P: what about council properties, they just come to our country and get one given. i had to wait 7 years and i served 6 years in the army.

Stephen K: No, but the incoming foreigners seem to have no problem in buying up properties within short periods of getting here don't they ?.

Mark F: Not just the young I've never earned enough to save for a deposit let alone get 1 and I'm 43. I tried when I was 25 and the house was 65 grand. They said I couldn't afford it even though at the time the rent I was paying was 550 a month and the mortgage was gunna be about 350 a month.

Peter D: The young need to know what the scum bag Blair has done to our young trying to get on the housing ladder thanks to your Labour representatives !!!!
------------------------------------------------------------------
Comments frequently mention lack of housing, house prices, NHS rationing and, above all, declining wages as reasons for voting to Leave. Violent crime features occasionally. These issues are related, in these voters’ minds, with immigration. Blair is generally regarded as a traitor, because of his decision to allow in East European immigrants without restriction, unlike France, Germany and others. His role in the Iraq death-toll is also mentioned frequently. I do not believe Remain campaigners should invoke Blair’s name or involve him in the campaign. He is seriously toxic for many people, for multiple reasons. Labour shares his guilt in the minds of many Leave voters which may partly explain Jeremy Corbyn’s extraordinary contortions on Brexit.
I found much less anger directed at Remainers than on previous visits. Many more Remainers were expressing their views on leave sites, mostly free of abuse, which I found very surprising. On prior excursions the few Remainers were clearly unwelcome. This is no longer as evident. It may be that I was lucky, or that Leavers have grown wearily accustomed to having so many Remainers populating “their” space, or it may signal a change of tone, or attitude among leave voters.
I posted some comments to gauge reaction, along the following lines;
Message 1
India, Pakistan, Thailand and Indonesia, among others, have said they want improved visa access to the UK for their people in return for agreeing to free trade. Liam Fox says these talks are going well. Their workers are much cheaper than the UK so they’ll benefit on the double, more cheap exports to the UK and more of their people coming to Britain. That looks like a bad deal for British workers, trade and wages.
Message 2.
The average skilled wage in South East China is about £8,000. The average skilled wage in the UK is about £28,000. If all trade barriers are removed, as proposed by ultra Free Traders like JRM & Prof Minford, then UK manufacturing will relocate to low cost locations, like China, Vietnam etc. That won’t do much to help employment, or wages in Britain.
Message 3.
Daniel Hannan MEP (Con), a leading Leave campaigner claims that immigration wasn’t an issue in the EU referendum. Global Britain Free Traders like Hannan and JRM are saying, privately, that the UK should allow virtually uncontrolled immigration, to encourage growth and free up the labour market. That’s not going to encourage higher wages, is it? It’s time leading Tory Leave campaigners came clean, what sort of Brexit are they really planning?

These messages were adapted and re-sent to suit various threads. The response was reasonable with several “likes”, some muted opposition and a few jokey responses. In one exchange I asked “who’ll get the blame for loss of manufacturing employment in Britain”. One wag answered “The Bloody EU, of course. Lol”
I don’t know if my experiences are unique. There was no overt hostility. I sense there are many Leave voters who know they have been deceived and they are receptive to messages amplifying their doubts and the risks inherent in going ahead with the Tory Brexit plans.
The campaign to stop Brexit is far from over. There’s everything to fight for.